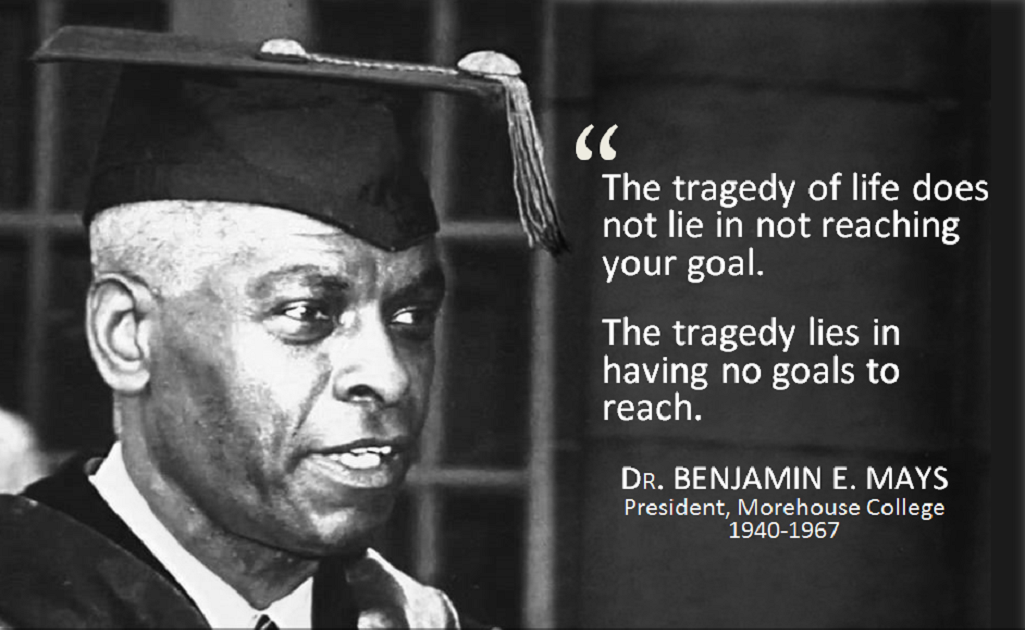 For a video tribute to Dr. Mays, click here.

​On January 20, 1970, Dr. Benjamin E. Mays was elected president of the Atlanta Board of Education.  As congratulations arrived by the barrel load, one lone rotten apple could not spoil the bunch: “Dear nigger: How does it feel to get elected to a job strictly on your color?”  This, to the president emeritus of Morehouse College, an elder statesman of theology and education, adviser to President John F. Kennedy, mentor to Dr. King, and the recipient of twenty-eight honorary doctorates.

This occurred sixteen years after Brown v. Board of Education legally desegregated schools.  Just months after Atlanta elected Maynard Jackson its first Black mayor.  As a soulful lyric of the day promised, “change was gonna come...”  That change, based on Dr. Mays’ philosophy of education, would be best stated in his own words as written in his autobiography, Born to Rebel:

If integration means or implies that one must forswear his identity as a Negro, I reject it...  The current emphasis on Black Studies is a tribute to the Black heroes of history who died fighting for freedom and equality during slavery and since emancipation, men who were never ashamed of being Black.  It is a tribute ... especially to Carter G. Woodson, who spent his life ... researching the Negro, past and present, and publishing books on the Negro at a time when White historians were degrading the Black man and denying him his rightful place in history, and while many Negroes were denying their African heritage.

I believe in Black Studies.  American education is incomplete and partially false unless it gives due credit to the contributions that Afro-Americans have made to the development of this great country....  Frankly, it doesn’t matter to me how this is done—whether there are departments of Black Studies, majors in Black Studies, schools of Black Studies, or an honest-to-goodness integrated curriculum which gives Black men their rightful place in the history of this country.  This needs to be done not only to give the Negro a sense of worth and well-being, but also to set the historical records straight and to enlighten the mind of White America.

​​In "Thank you, Dr. King," I spoke of how Dr. King "raised me"; inspiring my life's course.  But who lifted and inspired him?  The answer: His mentor, spiritual father, and, tragically, his eulogist, Dr. Benjamin E. Mays, Morehouse College's venerable sixth president and elder statesman.

An "early admission" student, 15-year-old Martin King met Dr. Mays in 1944.  The two soon formed a bond that would endure for the rest of Dr. King's life.  Here's the full text of Dr. Mays' quote: ​